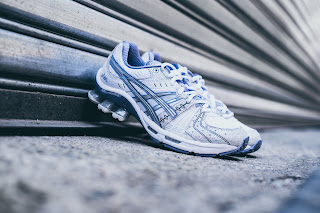 I’m not professional runner, but by my quick maths, I’ve run well over 6,000 miles in the past ten years (an average three-mile run about four times a week, give or take). During those thousands of miles over the years, I have stomped my way through multiple pairs of running shoes. Some brands I keep coming back to; others I wear for a little while then demote to lawn-mowing footwear.

While I can’t claim that the running shoes on this will be the absolute best fit for your feet, I can tell you based on personal experience that they’re great shoes. And I can certainly say that if you’re serious about getting into regular running, you need to have at least a couple of pairs of shoes, because as conditions change, so too must your footwear. These are my four favourites.

Every year, my in-laws get me a pair of Asics running shoes for my birthday, and they are one of the gifts I look forward to most. I tend to wear these more than any other running shoe — and I tend to wear them out by the time the new pair shows up. While a bit heavier than many other options for road-running shoes, I’ve never been bothered by the weight of these shoes, thanks to the superlative cushioning and support of the soles. My usual route is mostly concrete, so the fact that gel cushioning under heel and toe absorbs impact, while a proprietary “FlyteFoam” midsole adds some reactive pop back, is well worth the extra ounces. The upper wraps securely around my foot without any hot spots, and my foot never feels hot or sweaty, even on high-temperature, humid days. I would probably wear lighter shoes for a 400-metre race, but for my everyday jogs, these are the go-to shoes.

New Balances are famously, fabulously comfortable, and in the case of the Fresh Foam Zante V4s, they are also superlight. Each of these running shoes weighs a scant 8.6 ounces, which is a good 20 percent to 40 percent less than the other shoes on the list. The tread pattern is mild and the soles aren’t nearly as thick or cushioned as those on my trusty Asics, but for occasional use on shorter, higher-speed runs on good terrain, I love these shoes. Their light weight and ability to pack pretty flat also make them great for travel.

The Under Armour Toccoa Running Shoe comes in about ten different colours, and eight of them are bright and garish, though you might like them. A few combos, though, such as my favourite, the Moss Green, look more like a casual shoe than a runner. A blend of leather, textile, and mesh on the upper keeps them casual, while a supportive EVA midsole gives decent support. And on the bottom of the shoe, a relatively aggressive tread pattern is good and grippy in varied conditions. Because these shoes were designed for performance, they’re a great choice for wearing around all day when you’re a tourist or simply spending many hours out and about closer to home. [Editor’s note: This price does not include shipping costs.]

The Variant X.S.R. is part of Columbia Sportswear’s Montrail collection, which means it’s made for trails, but these shoes work superbly under road conditions, too. Truly hybrid in nature, the tread pattern is more akin to a standard road shoe, but the thick, impact-ready soles are ideal for stomping up and down the mixed-terrain conditions of the trail. The sole is supportive without being as rigid as that of many trail runners, and the upper is rather thick, offering plenty of support and protection. And on trails, they definitely minimise heel strikes and keep my foot centred and balanced.

For our story on the best gym shoes for men, we talked to ten guys about what they wear to run, cross-train, and more. This pair came recommended by avid runner Tim Evans, who said, “I have always been a runner, but about a year ago, I got heel spurs and plantar fasciitis — basically my left heel always kinda hurts. So I bought these fucking huge and ugly shoes by Brooks called Beasts. They are super-sturdy with stiff soles to support my feet, and treads like a car tire. They ain’t pretty, but they’ve helped me run again.”

In our story on the best sports shoes for men, runner Jeff Church recommended the Hoka Ones: “They have a wide toe box and huge rocker soles that are really good for your feet when running a lot of miles. I sometimes go back to running in other shoes, and it feels like I’m pounding asphalt in moccasins. They’re a game changer.”

If you like to run as well as cross-train and lift weights, Michael Chernow recommends the Nike Metcon 3: “They are super-versatile. They allow me to lift weights with awesome support. I can do most HIIT in them and even sprint. They are my favourite for functionality — which is what matters during a good workout.”